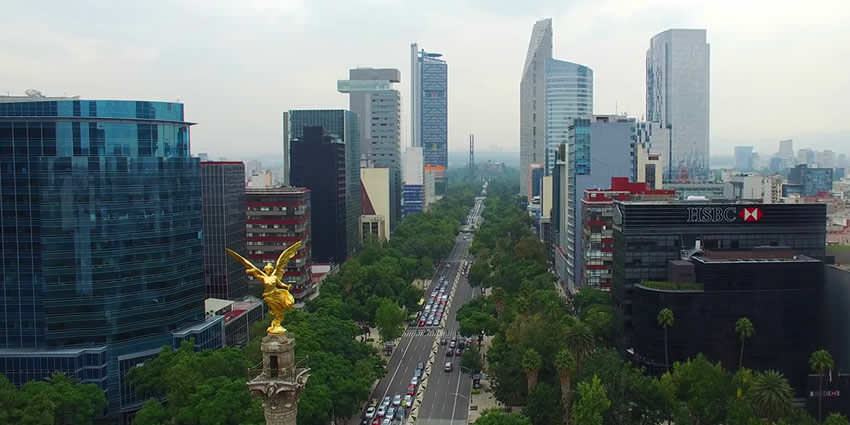 Paseo de la Reforma is a wide avenue that runs diagonally across the heart of Mexico City. It was designed by Ferdinand von Rosenzweig in the 1860s and modeled after the great boulevards of Europe, such as the Ringstraße in Vienna and the Champs-Élysées in Paris.

After the French intervention in Mexico overthrew the constitutional President Benito Juárez, the newly crowned Emperor Maximilian made his mark on the conquered city. He commissioned a grand avenue linking the city center with his imperial residence, Chapultepec Castle, which was then on the southwestern edge of town. The project was originally named Paseo de la Emperatriz (“Promenade of the Empress”) in honor of Maximilian’s consort and second cousin Empress Carlota. After her return to Europe and Maximilian’s subsequent execution, the restored Juárez government renamed the Paseo in honor of the Reform War.

It is now home to many of Mexico’s tallest buildings such as the Torre Mayor and others in the Zona Rosa. More modern extensions continue the avenue at an angle to the old Paseo. To the northeast it continues toward Tlatelolco, where it changes its name near the Plaza de las Tres Culturas. There it divides into Calzada de Guadalupe and Calzada de los Misterios that continue toward La Villa. Its western portion going west from Chapultepec Park passes south of Polanco on its way through the affluent neighborhood of Lomas de Chapultepec and then into Cuajimalpa and Santa Fe on the outskirts of the city, although when it reaches this point it is more a highway than a promenade.

Reforma has become a traditional place for the Mexicans to celebrate or protest. Most protest rallies commonly go along Reforma from El Ángel to the Zócalo or from the Zócalo to Los Pinos. Many parades also make their way through Reforma. El Ángel roundabout is a traditional place for the celebration of the victories of the national football team, mostly during World Cups.

During the Second French intervention in Mexico, in 1864 the republican government was on the run in northern Mexico and in Mexico City the government under Maximilian I was entrenched in power. It proclaimed, and in some cases instituted a series of reforms to modernize the country. These included the building of infrastructure to improve domestic communications, including roads and railroads. One such project type was the creation of a series of boulevards, imitating European ones such as the Ringstraße in Vienna, or the ones under construction at that time in Paris under Napoleon III, lined with grand monuments.

Two such projects were begun, one on Avenida Chapultepec, which was never completed, and the other to connect the city of Mexico with Chapultepec Castle (where emperor Maximilian resided). The latter was named Paseo de la Emperatriz, in honor of the Empress Carlota. Austrian mining engineer Alois Bolland was put in charge of the project and designed what was finally implemented.

The route and the construction of six boulevards radiating outward from the Zócalo, Mexico City’s main square, was assigned to a committee of prominent architects (Carl Gangolf and Ramón Rodríguez Arangoiti) and artists (Felipe Sojo, Miguel Noreña, Santiago Rebull). The committee’s original proposal planned . However, this would have required the demolition of large portion of the buildings in the city, as happened in Paris. The committee decided instead to begin the boulevard at what was then the edge of the city, 1.5 km west of the Zócalo, where Avenida Bucareli meets Avenida Juárez and where the Equestrian statue of Charles IV of Spain stood. From that location, the Paseo’s route led to the bottom of the royal residential area at Chapultepec Castle, where it connected to the road circling up to the castle at the top of the hill.

The Austrian engineers Bolland and Ferdinand van Rosenzweig were assigned to construct the boulevard. Originally it included two vehicle paths, 9 meters wide each, a central island 1.5 meters wide, and two pedestrian side paths, each 9 meters wide, resplendent with ornamental plants and trees. The city government and the owners of the agricultural land along the route opposed the plan. Reasons included the fragility of the land, which was reclaimed lake bed of Lake Texcoco, and that the saltiness of the soil would supposedly not support the lush vegetation required.

Despite opposition, the project continued. After a competition, it was assigned to the brothers Juan and Ramón Agea under the supervision of the Ministry of Development, Colonization, Industry and Commerce, headed by Luis Robles Pezuela. Of the original 3.15 km-long project, only one part was completed between 1864 and 1865, a road 20 meters wide, which was enormous for those days, without a central median, only a few areas on the side reserved for horses to rest. There were practically no buildings along the boulevard and sidewalks were not considered necessary.

The Paseo didn’t include bridges or similar constructions to cross the canals and rivers which then flowed near what is now Colonia Tabacalera (then Hacienda de la Teja). The Paseo was at this time for the exclusive use of the imperial court, a policy enforced by a dedicated police force. At the time, people with horses or horses and carriages, promenaded along the Paseo de Bucareli (today Avenida Bucareli between Avenidas Juárez and Chapultepec.

After the downfall of the Second Mexican Empire and the restoration of the republic in 1867, the Paseo de la Emperatriz was forgotten. The Paseo was renamed Paseo Juárez and then again renamed Paseo de Degollado in honor of General Santos Degollado.

On February 17, 1867 the Paseo officially opened to the public while work continued on it. By 1870 it had tree-lined pedestrian medians between “el Caballito” and the Palm Tree Roundabout, carried out by the Ministry of Development under Francisco P. Herrera. Between 1872 and 1876 an eight meter bridge was built at Hacienda de laTeja and the pedestrian medians were completed all the way to Chapultepec. Eucalyptus and ash trees and willows were planted and four monumental roundabouts were built between the Palm Tree Roundabout and Avenida Juárez. In 1872 the boulevard was renamed Paseo de la Reforma. On its flanks, upscale subdivisions were built, Colonia Americana – today Colonia Juárez, and Colonia Cuauhtémoc. The French style of the area was epitomized at the time by frequent comparisons of Paseo de la Reforma to the Champs Elysées in Paris.

Since 2003, Mexico City’s government started a renewal program for Paseo de la Reforma. It included the maintenance of the existent gardens and the creation of new ones, the intensive cleaning and sweeping of streets and sidewalks, the construction of new pink quarry sidewalks and benches, the creation of access bays in the Zoo, lake and Modern Art Museum for touristic and school buses, the installation of new lighting, the moving of the monument to Cuauhtémoc to the crossing of Insurgentes Avenue and Paseo de la Reforma, the construction of prism shaped concrete structures in the median which also have plants and flowers, the promotion of Reforma as a cultural walk organizing different expositions along the avenue sidewalks, and the maintenance of the monuments, sculptures and fountains. Also, a touristic route that goes from Chapultepec Park to the Historic Center along Reforma was established by a double deck bus called Turibus.

With the renewal project, new life has come to the avenue. It has become a main attraction of the city and the most expensive one to build on. However, after many of Mexico City’s banks and business left Paseo de la Reforma for the Santa Fe business district in the last decade, the boulevard has been the center of a real estate renaissance. Remarkable buildings built in recent years are Torre Mayor, Torre HSBC in the Ángel roundabout, Torre Libertad with St. Regis Hotel in the Diana fountain roundabout, and Reforma 222 designed by famous Mexican architect Teodoro González de León at Reforma and Havre St. Recently opened mix-used developments include a Ritz-Carlton Hotel & Residences and a Park Hyatt Hotel & Residences.

During President Díaz’s regime, Paseo de la Reforma became very popular among elite families as a residential area. Few of these original houses built in different European architectural styles remain and office blocks have been built on their place over the years. Although there is no single block that has kept its former architecture, a couple of scattered buildings show the opulence enjoyed by the elites during Porfirio Díaz’ regime.

Although most of the modern buildings are unremarkable, the Art Deco Loteria Nacional building and the functionalist IMSS building are an exception. Today Paseo de la Reforma houses offices ranging from the Mexican Federal Government to Banks and brokerage houses. The newer buildings show a mix of contemporary styles and the commonly used style for office buildings.

Five skyscrapers were recently along the boulevard between the entrance to Chapultepec Park and the Diana the Huntress fountain: Torre Reforma (244m), Punto Chapultepec (238m), Torre BBVA Bancomer (235m), and Torre Diana (158m).

Many monuments to people and events in Mexico’s history and the history of the Americas are situated on and along Reforma. Honored people include the Niños Héroes – the Heroic Cadets of the Battle of Chapultepec – with a particularly grand monument in the entrance of Chapultepec Park, a Monument to Cuauhtémoc, Simón Bolívar, José de San Martín and Christopher Columbus. There is also a fountain with sculptures that commemorate the nationalization of Mexico’s oil reserves and industry in 1938, and the Diana the Huntress fountain that includes a statue featuring the Roman goddess Diana originally named The Arrow Thrower of the North Star.

One of the most famous monuments of the Paseo is the Angel of Independence – a tall column with a gilded statue of a Winged Victory (that bears resemblance with an angel, therefore its common name) on its top and many marble statues on its base depicting the heroes of the Mexican War of Independence, built to commemorate the centennial of Mexico’s independence in 1910. The base contains the tombs of several key figures in Mexico’s war of independence.

Near the central section of Reforma, across from the Alameda, is the Monument to the Revolution. This is an enormous dome supported by four arches. It was originally planned, by Porfirio Díaz, to be a part of a new parliament building, but it never was completed because of the start of the Mexican Revolution. After Díaz’s overthrow it became a monument to the revolution that deposed him. The remains of Francisco I. Madero and several other heroes of the Mexican Revolution are buried here.