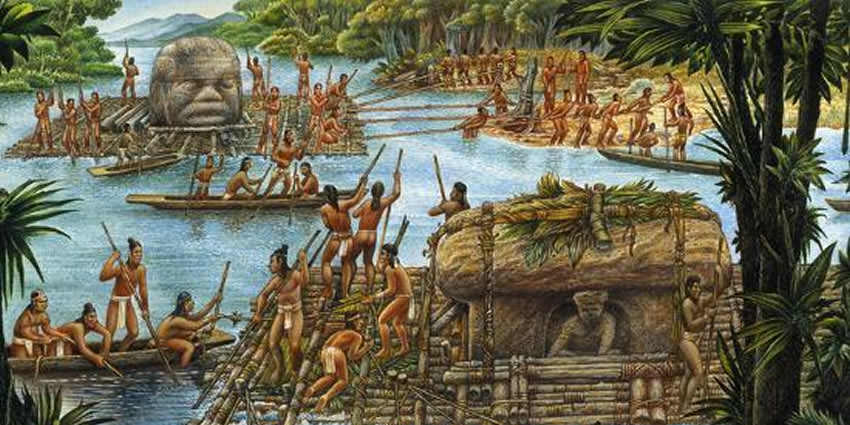 Almost all of the world’s earliest civilizations have arisen in river valleys, and the Olmec civilization of Mesoamerica was no exception.

The Olmec heartland is a low lying, crescent-shaped area along Mexico’s Gulf Coast, about 200 km long and 100 km broad (at its widest point). Within this compact area is found the vast majority of great Olmec stone monuments – the colossal heads, «altars» (actually thrones), freestanding sculpture, and stelae for which this ancient culture is famous.

The heartland is watered by some of Mesoamerica’s most high-volume rivers, including the Coatzacoalcos and Tonala, and these annual deposit layers of rich alluvium on the natural levees above their banks.

Rainfall is heavy, continuing even through most of the so-called dry season. These factors have resulted in the richest lands in all Mesoamerica for maize agriculture. Olmec civilization was as much the «Gift of the River» as were the ancient cultures of Egypt and Mesopotamia.

Ever since its discovery by pioneers like archaeologist Matthew Stirling and artist Miguel Covarrabias, the age and nature of the Olmec culture have been the source of endless controversy.

For a very long time, leading Mayanists were reluctant to grant it temporal priority over the Classic Maya, even though archaeological evidence outside the heartland showed that objects in Olmec style were stratigraphically very early, in fact, Formative or Pre-Classic in date.

It was only when the first radiocarbon dates on the major Olmec sites of La Venta and San Lorenzo were published that the Mayanists were proved completely wrong: the leading Maya authority of the time, Sir Eric Thompson, had underestimated the true age of the Olmec by about 2,000 years!

It is now clear that the most ancient, and the greatest, Olmec site is San Lorenzo, located just about in the center of the heartland. Its first inhabitants may have arrived there about 1400 ВС from the Pacific coast of Chiapas and Guatemala, but by 1200 ВС (in radiocarbon years), this great center was fully Olmec.

It was ruled by powerful kings who could command the carving of multi-ton portrait heads from basalt that had to be imported from the Tuxtla Mountains to the northwest.

The center of San Lorenzo is a great plateau, raised some 50 m above the surrounding plain and partly artificial, but the entire occupation is now known to cover no less than 500 ha.

Until its downfall about 900 ВС, there was nothing remotely comparable to it in the rest of Mesoamerica. At that time, the much-vaunted lowland Maya to the east were little more than hunters and gatherers who dabbled in agriculture; the polities of Oaxaca and the Valley of Mexico were small chiefdoms.

Here, and after 900 ВС, in La Venta, Olmec thinkers and artists developed Mesoamerica’s first religious iconography, with depictions of an array of deities in stone, pottery, jade, and almost certainly wood.

These sacred symbols were imported along with pottery vessels and clay figurines that had been fired in San Lorenzo kilns, up into highland Mexican sites like Tlatilco and Las Bocas, and across the Isthmus of Tehuantepec to the Soconusco region of the Pacific coast.

During the Middle Formative period (900-400 ВС), much of this diffusion of Olmec patterns of culture involved the export of finely carved jade, perhaps largely from La Venta and its support area.

In its beauty and power, there is nothing quite like the Olmec art style, whether expressed in tiny jade figurines or in enormous basalt monuments.

In spite of their great antiquity, the Olmec sculptures were the greatest ever seen in Mesoamerica. The strange beings depicted often combine feline features with those of humans – especially human infants; recent research is proving that some of the well-known gods of the Classic period can be traced back to Olmec beginnings.

Stirling and Covarrabias, together with the Mexican archaeologist Caso, claimed that Olmec civilization was the «mother culture» from which all later Mesoamerican civilization was ultimately derived.

In recent years, some influential archaeologists who work in areas outside the heartland have put forward that the Olmec was only one of a number of so-called «sister civilizations», that there was nothing unique about the Olmec, and that the «Olmec style» was nothing more than a group of unrelated symbols that might have been invented by any one of the «sisters».

Suffice it to say that all recent archaeological data have conclusively proved that the «mother culture» theory can now be considered fact. All complex culture in prehispanic Mesoamerica has its roots in the Olmec heartland.