Brief history of the Aztec Empire 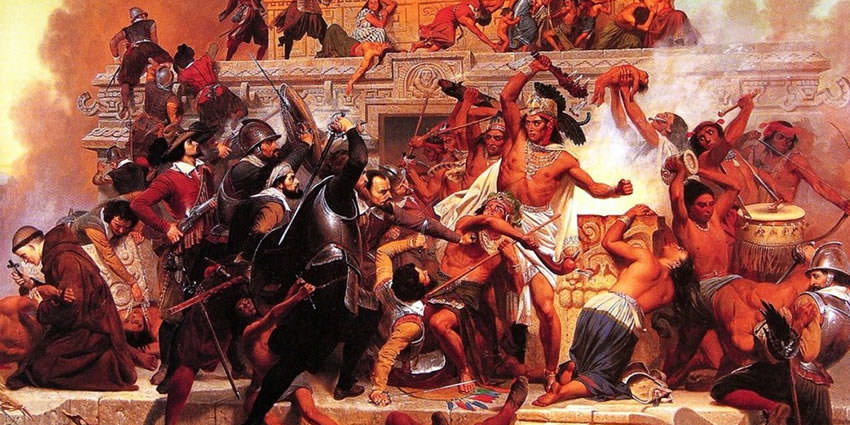 In the period from 1068 to 1168 AD (Presumably in 1168) Chichimecas tribe left their legendary homeland – the island Aztlan (“the place where herons live”, “the place of herons”). The exact location of the island is unknown, but many researchers believe that it was somewhere in the northern Gulf of California. From the word “Aztlan” comes the name “Aztec” (they called themselves “Mexica”).

More than 200 years, the tribe of the Aztecs wandered in search of their new home before they settled on two islands of Lake Texcoco. Mythological and historical sources indicate that the Aztecs first reached mythical starting point Chicomoztoc (“Seven Caves”) (Chicomoztoc served as a “transit” point for many wandering tribes, for example, tlaxcaltecs, tepanecs, Chalco), and from then went on a long travel south to more fertile lands of the Valley of Mexico.

Before they get to the Valley of Mexico, they often stayed for a long time: erected temples settled down internal tribal conflicts. Its first sanctuary, they erected on the hill of Chapultepec (“grasshopper hill”), owned by the city-state Azcapotzalco, where they lived from 1253 to 1295 AD. The first celebration of the New Fire, they celebrated in Coatepec, the second – in Apatzco (in the Valley of Mexico), the third – in Tezpayocan (on the shores of Lake Texcoco), and a fourth – in Chapultepec (Lake Xochimilco).

Many tribes that lived around the lake have met them very unfriendly (they called them “people without a face”) and led the fight to them. In the Valley of Mexico, the Aztecs were attacked by a coalition of coastal cities, caught up and exiled as slaves in Culhuacan (Culhua – “the place of those who have ancestors”) – there they were warriors, mercenaries, and later for their courage they deserve honor and respect. But in 1322 Culhuacan drove them from their lands, and the Aztecs moved inside of the lake in the swampy islands. According to another version, they get independence and leave the area – Tizapan (“at chalky water”).

In 1325 on a small island in Lake Texcoco in reality, Aztecs saw an ancient prophecy, which was revealed to the chief Tenoch – the main Aztec god Huitzilopochtli had predicted them to settle where they saw an eagle holding a snake in its claws, and sitting on a cactus. In the same year, the capital of a future founded the Aztec empire – Tenochtitlan was founded, named after the legendary leader Tenoch (hence another name for the Aztecs – tenochca). There is another translation of the name of the city – “a place where cactus grows on a rock.” Later the city was divided into 4 quarters: Teopan, Moyotlan, Cuepopan and Aztacalco, and in the middle of the city was located a giant ceremonial center.

Itzcoatl Emperor and his nephew (or brother) Tlacaelel (advisor of the emperor) was the first who officially sanctioned the practice of sacrifice. Identifying the main Aztec god Huitzilopochtli as the sun, they must periodically feed the heavenly body of fresh human blood, so it did not stop its motion path across the sky.

In the same year Azcapotzalco opposed Tenochtitlan, but the Aztecs created an alliance with the Tlatelolco, Tlacopan, Texcoco, Tlaxcala, Huexotzingo and eventually defeated tepanecs of Azcapotzalco in 1430.

Itzcoatl forms a powerful triple alliance of Tenochtitlan, Texcoco, Tlacopan (Mexica, acolhua and tepanecs) with the supreme council, in which foreign policy issues solved by Aztecs, trade issues – by tepanecs and law issues – by acolhua. War Spoils in such an alliance were divided in the ratio 2:2:1. A Tlacaelel began to lead an army of the Triple Alliance because he manifested itself at war with tepanecs as outstanding commander.

Itzcoatl captured the agricultural south and north of the Valley of Mexico. Council of elders, warlords and priests have been replaced by the Council of Four, the highest advisory body to the tlatoani, consisting of his relatives and had the right to choose a new tlatoani. Itzcoatl also destroyed the old pictographic manuscripts, in which the Aztecs and their deities assigned a modest role in the history of the Valley of Mexico. Instead, they wrote new manuscripts, which magnified the Aztecs and kept silent about a primitive tribal past.

In 1440, Montezuma I came to power (1440-1469). During his rule sacrifices in the form of fights between captive enemies became popular. If during such bouts captives showed courage and provided stubborn resistance, priests awarded valuable gifts to one who captivated them. In this form of sacrifice also appeared a political subtext – Montezuma I often invited to such fights leaders of the not yet conquered kingdoms.

Between Triple Alliance and other city-states – Tlaxcala, Huexotzingo, Cholula – by mutual agreement there were the “war of flowers”, the main purpose was to get prisoners to offering a sacrifice to the Sun.

Aztec Empire acquired new lands and needed administrative reforms. There was introduced special order management, new rules to promote the social ladder. Montezuma I laid the foundations of the judicial system distinct from community and clan law. Tlatoani still retains their deified status, and the ongoing process of concentration in the hands of the ruler of the military, political, religious, ideological, legislative and judicial branches.

In the mid-15th century the Aztecs continued to equip his capital and built a huge dam across the lake, which can supply the inhabitants of Tenochtitlan with freshwater and protect the city from flooding. Aztecs built the first aqueduct to the city.

During his reign, Ahuitzotl was forced to do the construction of irrigation and drainage facilities, due to the periodic lack of food and freshwater in Tenochtitlan (the city’s population was growing rapidly). Thus, the second aqueduct was built in the city.

By this time period the empire has already a huge territory with a variety of rich natural resources of the northern regions of Mexico to the current boundaries of Guatemala: arid areas north of the Valley of Mexico, mountain gorges of the current state of Oaxaca and Guerrero, coastal Gulf of Mexico, Pacific ridges.

In 1519 began the expedition of Hernando Cortez. He sailed from Cuba on February 18 with 11 ships onboard which were 508 soldiers, 16 horses and a few guns. First he sailed with 10 ships to Cozumel. He then rounded the Yucatan Peninsula and sailed to the Mexican coast, where he founded the city of Veracruz.

After the arrival of the Spaniards, the Aztec emperor was brought the report: “The gods have returned. Their spears spewing flames. Their warriors have two heads and six legs, and they live in floating homes.” Montezuma expected the performance of the ancient prophecy of the return of Quetzalcoatl in the year Ce Acatl (year of cane rod), which corresponded to 1519. During the ten years prior to this event in the Aztec empire was 8 omens of an impending disaster:

During his stay on the Gulf Coast, Cortez repeatedly clashed with local tribes, but the force of arms of the Indians was not comparable to European – powder did the trick. Meanwhile, Montezuma received the reports, which said that white people shooting lightning and dressed in armor made of silver and stone, and can not be defeated in open battle. To somehow appease the “gods” Montezuma sends Cortez different gifts. But the Spaniards were not ready yet to go to Tenochtitlan. Constant skirmishes took their toll – the bread, bacon and salt were in the end, the soldiers are tired of wearing heavy armor, and many were afraid of freezing in the mountains, as well as they were afraid a huge Aztec army. However, Cortes was not going to come back with empty hands and the desire for easy and quick gains, as well as the speaking skills of the leader of the Spaniards, have convinced all to take a march on Tenochtitlan.